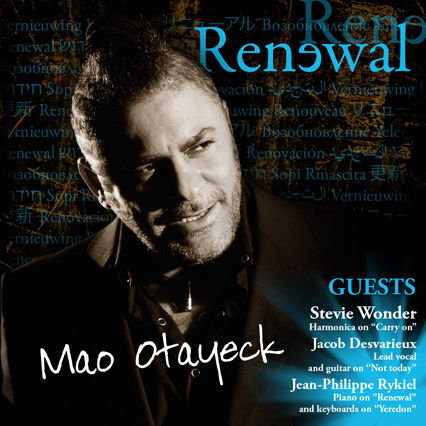 From the West Coast of Africa to the West Coast of America, Mao Otayeck’s music, as heard on his first solo album entitled “Renewal”, carries with it an eclectic world mix of soul, rock and African sounds covering the theme of love and hope.

"I'm an all-terrain musician!", he jokes when asked to define himself. "I'm a mixture of different backgrounds including Lebanese, Malien, Argentinian, Ivorian, and French".

His initial encounter in Paris with the legendary Afro-jazz musician Cheik Tidiane Seck and Tony Allen, Fela Kuti's drummer, marked the beginning of his professional career. In 1993, he began a 10-year collaboration with African reggae artist Alpha Blondy as band leader and guitarist for the Solar System.

For 20 years, chance encounters and the search for new sounds allowed him to travel the world and embark upon an incredible project in Los Angeles.

It all began on January 1st 2005 when a demo recording of "Renewal", his song for peace, caught the ear of Stevie Wonder. In March of 2005, Stevie Wonder invited Mao Otayeck to join the NAACP Image Awards ceremony in Los Angeles where he met Herbie Hancock, India Arie and Prince. This marked the beginning of their superb artistic collaboration at the mythical Wonderland Studios in Los Angeles resulting in Stevie Wonder’s composition for the song "Wait" and harmonica playing on "Carry On" track.

On September 28, 2008, during Stevie Wonder’s concert in Paris, Palais Omnisport de Paris-Bercy, Mao Otayeck was invited to perform "Carry On" along with the Motown legend’s harmonica. This was followed by an after-hours performance by Mao Otayeck with Stevie Wonder’s band at “Le Comedy Club” in Paris. Stevie Wonder joined Mao Otayeck on stage to offer his full support for launching his solo career.